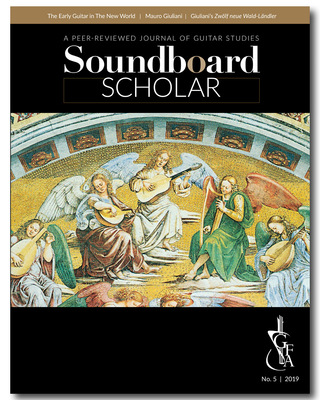 The scene of angel musicians on our cover is a detail shot of the topmost portion of the famous “Paradiso” fresco in the Cathedral of Orvieto, Italy. It was painted by Luca Signorelli in 1499, at the very time of Columbus’s third voyage, when (as Richard Pinnell explains in this issue) Spanish guitarras and vihuelas were first being introduced to the New World. The Signorelli fresco’s music-historical interest for us lies in the guitar-like instrument depicted in the hands of the highest angel in the heavenly ensemble—a position of no small honor for her or her instrument. It is approximately the size and shape of the “vihuela” by Juan de Juanes (1523–1579) shown in figure 3 of the Pinnell article. That instrument, in Italian, would have been called a viola da mano. In Spanish it is known as a vihuela de mano.