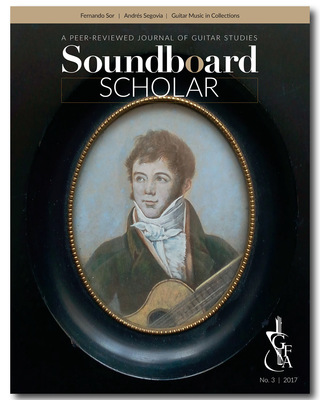 The color portrait of Fernando Sor which appears on the cover of this issue, not previously published as far as we know, is a hand-colored version of a printed (b&w) copy of a painting—an original portrait (now lost) of Sor—by one Innocent Louis Goubeau. Before it disappeared it was copied, in the mid-1820s, by both a lithographer and an engraver, probably in response to public demand. The lithograph, according to the British Museum exemplar now online and well documented (No. 1893,0123.45), bears the attribution “Goubeau pinxit / Lith de Engelmann / Lithod par Bordes,” which means that the original painter was Goubeau, the preparer of the image on the lithographic stone was Joseph Bordes, and the craftsman who inked the stone and pulled the prints was Godefroy Engelmann. The engraved copy, slightly sharper than the lithographic one, has this attribution: “Drawn by L. Goubeau / Engraved by M.N. Bates.” Our cover illustration apparently began its existence as a paper print and was over-painted by hand (water-colored). It is a one-of-a-kind miniature version (the inner oval being 9.5 x 7.3 cm.– about 3.7 x 2.9 in.) of how the original portrait might have appeared. The present owner, Norbert Fischer, who kindly gave us permission to reproduce the portrait, is “a classical guitarist and guitar teacher who lives with his family in a little N. German village some 60 km. from Bremen.” He acquired it from an antiquarian dealer in response to an eBay posting of 2015.